Below are summaries of current and past projects. 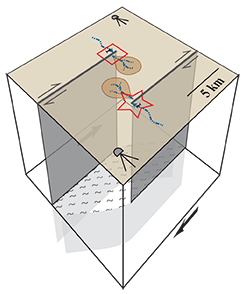 ve faults are essential for assessing seismic hazard and understanding active tectonics. Unfortunately, geologic slip rates determined from ages and relative displacements of offset features are spatially limited. Slip rates for many faults are thus estimated from a single measurement or in the absence of any direct measurements, by other means such as geodetic modeling.

We are using numerical models to estimate the probability that such spatially limited measurements are representative of the average slip rate for realistic fault geometries. In Resor et al. (2018) we found that point measurements of slip rate along strike slip faults with releasing stepovers are unlikely to yield representative slip rates. Site-specific models, however, can be used to put geologic slip rate estimates in context and make more accurate seismic hazard assessments. 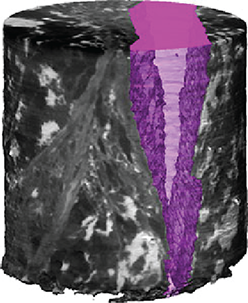 Exhumed fault zones contain a record of earthquake cycle deformation written in stone. We are interpreting this record by studying faults containing pseudotachylyte, solidified frictional melt. Extensive frictional melting requires slip rates that are unique to earthquakes. The resulting thin veins of melt quench rapidly, freezing in structural geometries soon after slip ceases. Pseudotachylyte vein geometry thus reflects the physical and thermal conditions of the fault zone during and immediately after an earthquake.

We are imaging and characterizing the geometry of pseudotachylyte bearing fault zones through field studies and high-resolution computed x-ray tomography of fault rock cores. When combined with numerical modeling, these observations provide important constraints on the mechanics and dynamics of fault zone processes. For example, in Sawyer and Resor (2017) we show that the occurrence and shape of injection veins can be used to constrain minimum melt temperatures.

Using deformation to constrain the crustal composition of Venus

Most of Venus’s surface is made of volcanic plains of nearly uniform age, indicating fundamentally different tectonic and melt processes than those on earth. One group of rocks on the surface of Venus, the tesserae terrain, however, appears different. These highly deformed rocks are somewhat older than the surrounding plains and recent remote sensing work indicates that they may be high in silica and thus more similar to Earth’s continental crust. If true, Venus may have had an earlier geologic history that was more similar to Earth’s.

We are using the geologic structures that result from deformation of tesserae terrain in order to provide independent constraints on their composition. For example, tesserae terrains contain abundant parallel folds with a characteristic wavelength. Such folds may form when a stiff surface layer overlies a more fluid subsurface. The wavelength of the folds reflects both the thickness of the surface layer and the contrast in stiffness between this layer and the underlying material. Layer thickness and stiffness contrast depend on the composition of the material.

Links to related programs at Wesleyan